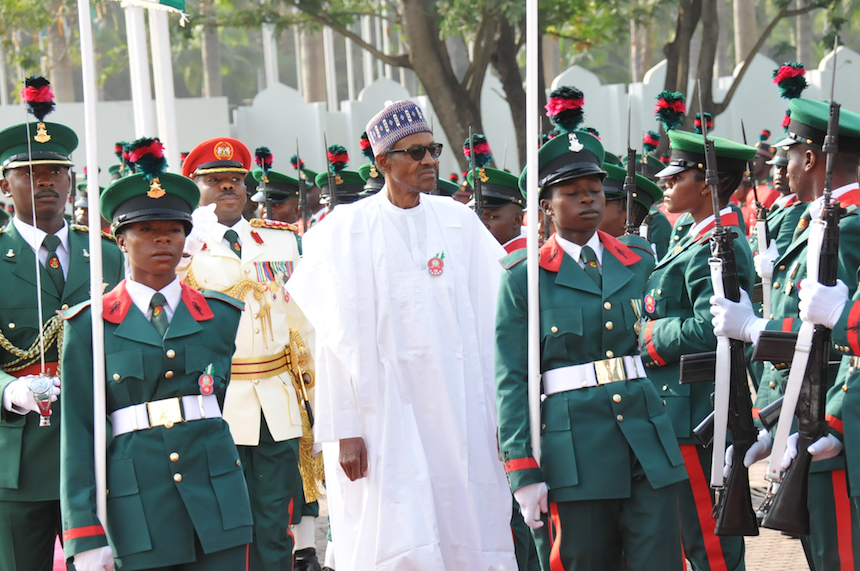 Nigerian President Muhammadu Buhari’s visit to the Obama White House three years ago was ecstatic. By contrast, his visit this week to the Trump White House will be awkward. This time around, his host is a president who has referred to African states as “shithole countries” and remarked that Nigerians would never want to leave the US to “go back to their huts”.

Given Trump’s unpalatable statements about Africans in general, and Nigerians in particular, it’s fair to wonder why Trump invited the leader of a country he despises so much for a state visit. And also why Buhari accepted the invitation.

One answer is that the meeting offers both leaders a platform to promote their various political goals. Trump could use the occasion to showcase his credentials as an indefatigable fighter against terrorism. And he could pledge to help Buhari defeat Boko Haram in northern Nigeria, much as he has done with ISIS in Syria and Iraq.

For his part, Buhari is headed for a tough re-election bid a year from now and may believe that a visit to the White House could boost his international profile. His prolonged absence from office last year due to illness led some observers to believe that Nigeria had abandoned its role as a leading voice for Africa.

It’s not inconceivable that Buhari’s visit to the White House has little to do with economic relations, but more about the political gains both leaders can make. Buhari’s US visit comes on the heels of a recent visit to Downing Street, and will soon be followed by another visit to the Elysee Palace.

What must not be forgotten is that US dependence on Nigerian oil has increased dramatically with imports jumping threefold in 2016 driven by uncertainties in Iran and Venezuela. This suggests that both countries have a common interest in maintaining a close relationship.

What will be on offer

One deal that’s likely to be consummated during the meeting is the planned sale of up to 12 Embraer A-29 Super Tucano attack planes to the Nigerian Air force for about USD$600 million to help fight Boko Haram. Trump is also likely to announce the deployment of more military advisers to assist Nigeria in fighting Boko Haram.

But fighting Boko Haram requires much more. As the commander of the US Africa Command, General Thomas D. Waldhauser, recently observed,

Buhari could also do with substantial non-military assistance. In particular, he needs help to address two huge social problems in Nigeria: the fact that 70% of Nigerians live in abject poverty, and that more than 50% of the country’s young people are jobless.

But Buhari should not count on Trump to increase aid for the kind of economic transformation the country needs. In the 2017 financial year, the US budgeted a mere USD$608 million in foreign assistance to Nigeria, a number which eerily echoes the price tag for the 12 fighter jets Nigeria wants to buy.

US assistance is unlikely to increase for two main reasons. First, Trump is pursuing his “America First” philosophy and has vowed to slash its foreign aid budget. In 2017, the budget was USD$34 billion, or 0.2 percent of US budget, out of which Africa received 21%.

The other reason the aid taps are unlikely to be opened is that Trump has threatened to withhold aid to countries that supported the UN resolution condemning his administration’s decision to recognise Jerusalem as Israel’s capital. Nigeria is one of the several African countries that voted for the resolution.

Nigeria is America’s 56th largest goods trading partner. The US exported goods worth USD$1.9 billion in 2016, and imported goods worth USD$4.2 billion that year, leaving the US with a trade deficit of USD$2.3 billion with Nigeria. But these numbers are deceptive because US imports are made up mainly of crude oil. Stripping out the oil, the US would have had a trade surplus of USD$1.7 billion in 2016.

To alleviate poverty and create jobs Nigeria needs to export more non-oil products to the US. At the very least, Buhari should press Trump to strengthen the African Growth and Opportunity Act (AGOA) enacted in 2000 to facilitate the access of African exporters to the US market. Nigeria was the leading AGOA exporter in 2016, with over USD$2 billion worth of exports under the Act.

There are fears that Trump might jettison the Act, or weaken some of its provisions that he deems inimical to his “America First” philosophy. Buhari should defend it unequivocally.

And he should tell Trump that Nigeria needs more US foreign direct investment. In 2016 the number was USD$3.8 billion in 2016, far less than the USD$13 billion the Chinese invested in Nigeria in the same year.

The US-Nigeria relationship has historically been driven less by economics, but more by convenience and indifference. While Nigerian presidents covet a visit to the White House, US presidents tend to be indifferent, and sometimes passive, about Nigerian affairs.

An example is the blind eye various US administrations turned as successive military dictators presided over Nigeria for three decades. Some of those dictators managed to stash their ill-gotten wealth in US financial institutions. I suspect that Buhari will be asking Trump to help repatriate some of those illicit funds. Whether Buhari also gets to ask Trump to commit to trade and investment, and not fighter jets, remains to be seen.

Scientists Design a Novel Formula That Repels and Kills Mosquitoes