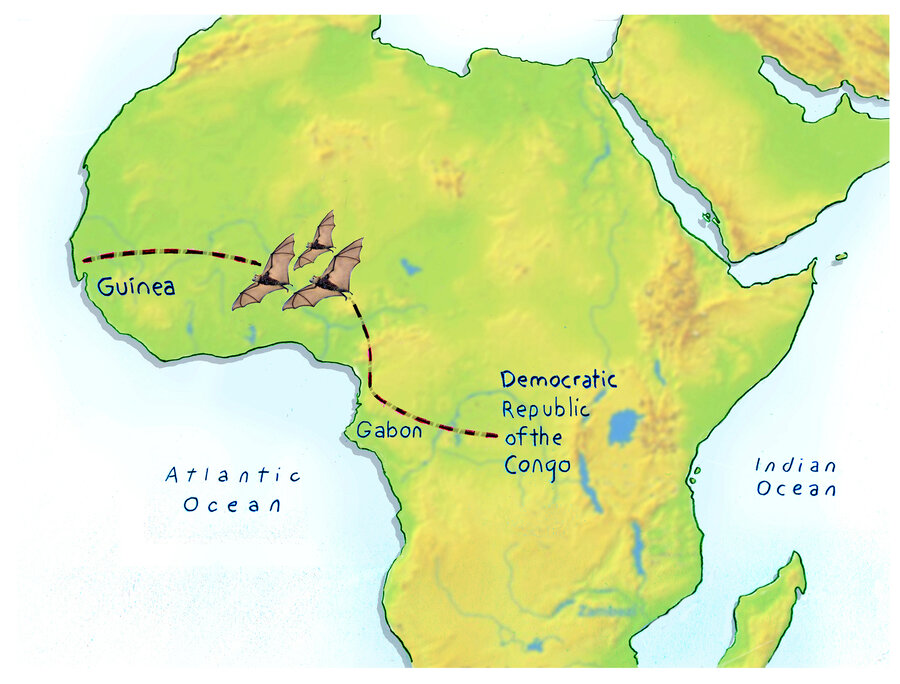 The team’s approach works by tracking the migratory patterns of bats, which are believed to be a main carrier of the Ebola virus. Bats, in this instance, are the reservoirs of Ebola. This means that they are carriers and transmitters of the virus, though it does not cause them harm.

“In our model, the appearance of outbreaks is tightly linked to fluctuations in environmental conditions which have an impact on both bat migration patterns and infection rates,” says Buceta.

Buceta, Bocchini and Fiorillo worked with satellite information and parameter sampling techniques to create their framework, which integrates data and modeling to predict the conditions linking bats’ behavior with the outbreak of Ebola. They have detailed their work in a paper titled “A Predictive Spatial Distribution Framework for Filovirus-Infected Bats” published online today in Scientific Reports.

The model utilizes information on bat birth and death rates, the rate of infection of bats with the Ebola virus and recovery rates, bat mobility, seasonal changes and information about the availability of food and shelter to forecast bat infection peaks in a given region.
And the results are compelling.

The 2014 Ebola outbreak in West Africa that killed more than 11,000 people is believed to have originated with a two-year-old in Meliandou, a remote village in Guinea, a country that had never before seen a case of Ebola. The type of virus was identified as the deadliest strain, found in Zaire–a country thousands of miles away.

How did it get there? The likeliest answer: bats.

Using their framework, an analysis of the data from the region near Meliandou around the time of the start of the 2014 outbreak revealed two yearly peaks of infection at Meliandou coinciding with the birthing seasons. Indeed, when the researchers retroactively analyzed the data from that time and location, their model predicted a peak of Ebola-infected bats in Meliandou during the months when the outbreak began.

By contrast, when the researchers worked with similar data from Bamako, Mali–a region nearly 400 miles away from Meliandou and with different climate conditions–their approach did not forecast a peak for that time of the year.

“Such findings strongly suggest that environmental factors play a key role in the spread of the Ebola virus among bats,” says Buceta.

This predictive tool could be used to deliver guidance about the specific locations and periods of the year during which an outbreak is more likely to appear due to bats. It could also help reduce the risk of future spillovers from animals to humans.

Establishing how to measure the key environmental factors driving resource-related bat migration was key to developing the model.

Bocchini, a civil engineer, had been working with smart sampling techniques to resolve parameter fluctuations pertaining to his research on structural engineering and regional hazards. Through that work, he developed a highly efficient computational technique that addresses probabilistic big-data problems and enables researchers to analyze a small subset of truly representative cases.

“We needed to study the random fluctuations of available resources over the entire African continent at high resolution; it was a massive computational and probabilistic challenge,” says Bocchini. “We recognized that from a mathematical point of view, the problem is similar to the random propagation of seismic waves in a region subject to earthquakes, and we could adapt our tools.”

They applied Bocchini’s sampling technique to efficiently account for the uncertainties in the data and to establish useful parameters for measuring resource availability, given fluctuating conditions over time and geography.

After establishing the parameters, they were able to input data regarding temperature, humidity and other factors.

“We could then predict the concentration of infected bats one might expect to find given those particular conditions,” says Buceta.

In Southern Mozambique, 1 Out of 3 Persons Diagnosed with HIV Do Not Disclose Their Status

What Kenya Needs to Do to Take Advantage of Its Rainfall