The STOP THE BLEED course teaches a skill with lifesaving potential that is easy to learn and globally relevant. Two studies presented at the American College of Surgeons (ACS) Clinical Congress 2020 provide evidence that STOP THE BLEED training is effective and has made a lifesaving difference around the world.

In one study, an hour-long STOP THE BLEED course was taught to 121 nursing students at the Kabala Nursing School in rural Sierra Leone. After one year, a survey was administered to the participants to learn whether they encountered bleeding emergencies and whether they were able to administer bleeding control techniques. Seventy-six people responded to the survey, reporting a total of 190 encounters with life-threatening bleeding situations.

The most common injuries requiring a bleeding control intervention were motorcycle collisions (34 percent), knife wounds (19 percent), and car accidents (13 percent). Participants reported they most commonly used wound packing (41 percent), direct pressure (26 percent), and tourniquet application (20 percent). Because they were able to intervene, nearly all of the patients (94 percent) survived, with a majority (82 percent) reporting to the hospital for further medical care.

“People are getting basic medical knowledge, which is essential. With or without a medical background, they can apply this knowledge to save a life,” said Samba Jalloh, MB, ChB, of the College of Medicine and Allied Health Sciences, Freetown, Sierra Leone.

In low-to-middle income countries (LMICs), access to health care can be sporadic and the burden of injury can be significant. The findings from this study provide evidence that STOP THE BLEED training can be implemented in LMICs with sustained success in treating bleeding emergencies before a patient is able to be transported to a hospital. 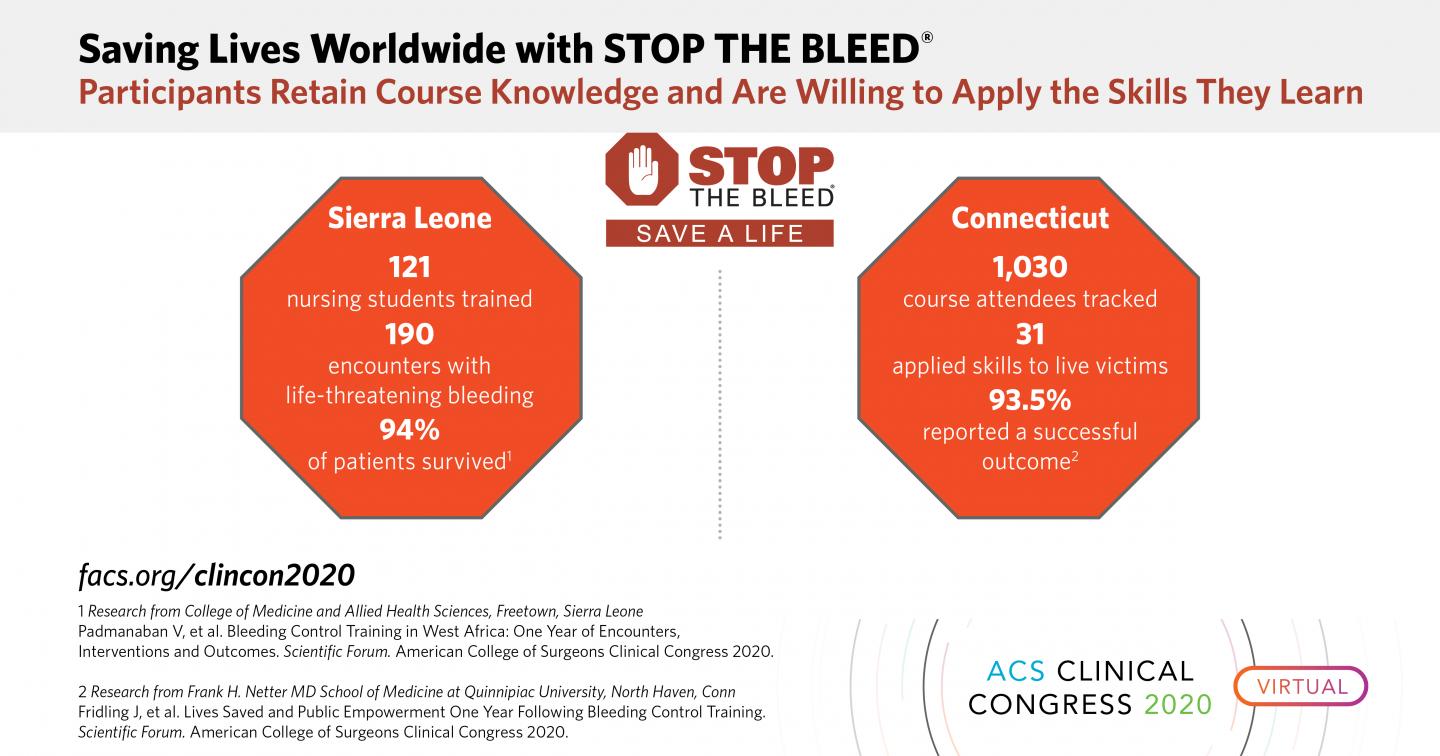 “Here, there are a lot of risks. Transportation is not very safe, and hospitals can be far away from villages. Knowing how to stop the bleed is very important. People are using the skill to save lives,” Dr. Jalloh said.

The researchers stressed that these findings demonstrate enormous lifesaving applicability of STOP THE BLEED training in Sierra Leone. They noted that future studies should focus on the specifics of adapting bleeding control for use in other LMICs.

In another study from researchers in Connecticut, STOP THE BLEED course attendees demonstrated a strong proficiency of bleeding control knowledge after one year, and course participants, including previously untrained attendees, reported successfully applying hemorrhage control techniques to save lives.

“In our study, we had people as young as 14 and as old as 64 report that they used bleeding control skills. Eight of these people had not undergone any previous training in bleeding control and seven of the people who used the skills did not work as a first responder or in a health care setting,” said lead study author Jeremy Fridling, a fourth-year medical student at the Frank H. Netter MD School of Medicine at Quinnipiac University, North Haven, Conn.

The researchers tracked 1,030 STOP THE BLEED course attendees, administering surveys before and after the course, as well as six and twelve months later. Of the respondents, 31 participants (8.4 percent) applied bleeding control skills to live victims, with 29 (93.5 percent) reporting a successful outcome.

In the post-course surveys, the average response was between “agree” and “strongly agree” for confidence in knowledge and skills. Notably, the average response (on a 1-5 scale) significantly increased from pre (4.1) to post (4.6), six-month (4.4), and twelve-month (4.5) for willingness to treat a victim with serious bleeding.

“This study is a validation that regular, ordinary people–if you train them and give them a chance and empower them to do a public good and stop bleeding–can stop bleeding with a successful outcome,” said study coauthor Lenworth Jacobs, MD, MPH, FACS, professor of surgery, University of Connecticut, and Medical Director, ACS STOP THE BLEED program.

New COVID Test Doesn't Use Scarce Reagents, Catches All but the Least Infectious