Street hawking is a growing problem in developing countries like Nigeria due to its associated risks.

In Nigeria, the increasing scourge of poverty and worsening economic conditions means there has been a drastic rise in street hawking in the country’s major cities such as Lagos, Port-Harcourt, Abuja and Onitsha. This is a clear manifestation of socioeconomic realities on the ground. Families and young people migrate to cities in search of livelihoods and end up street hawking.

The Lagos State Government has recently started enforcing a law that bans street hawking in the state. As part of the city’s urban renewal policy, Kick Against Indiscipline – the state’s law enforcement unit – started to remove hawkers. Over 80% of Nigerians live below the poverty line and street hawking has become the easiest route to survival. Thousands rely on street hawking for survival, conspicuously standing at traffic interchanges, weaving between cars and setting up on pavements. The ban was originally part of the government’s drive to modernize and improve infrastructure in the state. But the way that the unit has chased street hawkers, pursuing them like animals, confiscating their goods and demanding money for bail will cause more harm than good. In July 49 bus rapid transport vehicles were vandalised after a hawker evading the unit was knocked and killed by a BRT bus.

There is no justification for such a policy in Lagos. Policies should be founded on research and evidence based practices. Nigeria should learn from countries like Bangladesh, Ghana, Uganda and Tunisia. All have failed to forcibly evict street hawkers. Street hawkers are transient, resilient and adaptive. Threatened with eviction, they will change their strategies, location and mode of operation. They could also resort to crime when forcefully evicted.

The question is how can government effectively respond to issues of street hawking in Lagos?

There is no consensus on an effective intervention. The state argues that street hawking promotes child trafficking, misuse of public space, environmental degradation, lawlessness and violation of human rights.

As part of the clean up, the government has promised to offer small loans to street hawkers through the Employment Trust Fund to use as a means to start businesses. But it’s not known how accessible the fund is.

Nigeria is in its worst economic shape in history. The poor bear the brunt. And there is no social welfare system in the Lagos state to cater for poor families.

There is a pressing need to protect children and other young people from being exploited. Evidence shows about 40% of children that hawk on streets are victims of adult exploitation. This amounts to child abuse, according to United Nation Convention on the Rights of the Child. Although Nigeria promulgated the Childs Right Act in 2003, it has not been implemented effectively.

Children are sometimes sent to the streets by their parents to supplement the family income. Others are children trafficked from neighbouring states or West African countries. These children were given away by their parents on the premise that they would receive food, shelter, good education and care. But they end up being exploited. 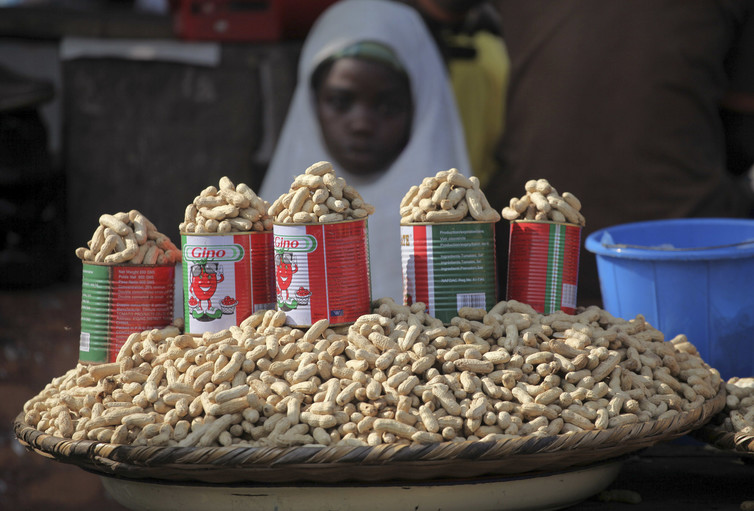 A young girl sells peanuts on the side of the street in Lagos, Nigeria. Reuters/Akintunde Akinleye

The impact of street hawking is enormous – especially for vulnerable children. They are at risk of being hit by a car, subjected to sexual abuse and of suffering physical exhaustion. For those that attend school, street hawking also affects their academic performance.

State social protection services have a responsibility to protect children and young people from the negative impacts of street hawking.

And the Lagos state government has the responsibility to protect vulnerable people. Responding effectively to street hawking requires both a structural approach and one that focuses on individuals. Parents who use children to hawk for income should be given jobs to help them provide for their families and meet their economic needs. And children should be provided with training to make up for any deficiencies in knowledge and skills to help them lead a successful life.

The anti-street hawker policy will not be fruitful if it’s enforced without addressing the root cause of street hawking.

Assessing the Risk from Africa as Libya Loses Its Chemical Weapons