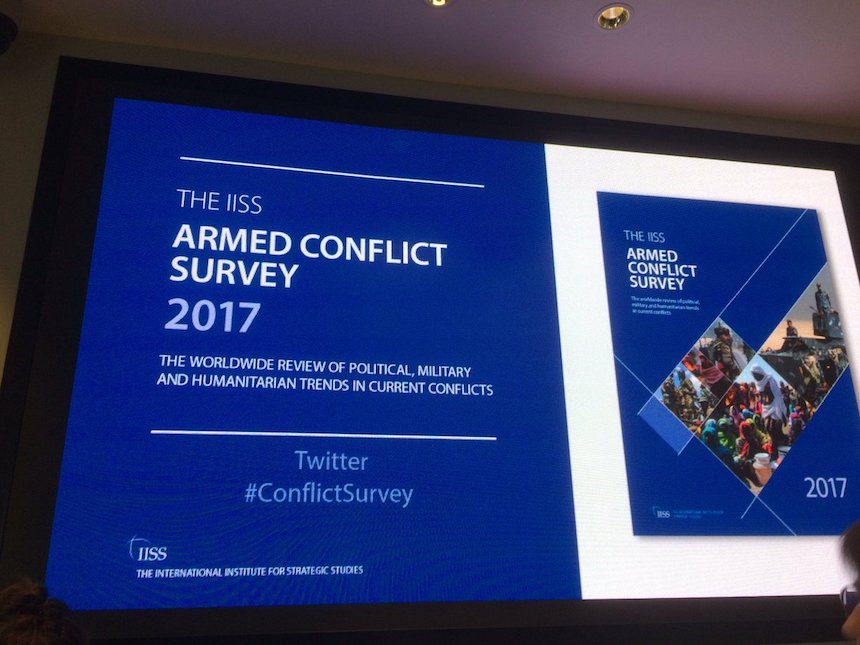 Just ten conflicts accounted for more than 80 percent of the fatalities worldwide, according to this year’s IISS 2017 Armed Conflict Survey.

Syria’s conflict, which is the subject of extensive media and diplomatic attention, was the world’s most lethal conflict for the fifth year running. The second-most lethal conflict, by comparison, has received scant attention – Mexico’s battle with criminal cartels, which accounted for 23,000 deaths. Dr. John Chipman, Chief Executive and Director-General of the IISS said: “The death toll in Mexico’s conflict surpasses those for Afghanistan and Somalia. This is all the more surprising, considering that the conflict deaths are nearly all attributable to small arms. Mexico is a conflict marked by the absence of artillery, tanks or combat aviation.”

IISS notes that the ten most lethal conflicts were: Syria, Mexico, Iraq, Afghanistan, Yemen, Somalia, Sudan, Turkey, South Sudan, and Nigeria. The research, published by the International Institute for Strategic Studies, shows deaths from conflict worldwide fell to 157,000 last year compared to 167,000 in 2015. Yet the IISS noted in parallel a rise in the number of intractable conflicts that have the potential to flare at short notice.

Dr. Chipman said: “Finding the right policy responses to ‘simmering conflicts’ will be a major challenge for heavily pre-occupied policy makers, but essential if conflict fatalities around the world are to be reduced substantially. In this area as in so many others, good governance is a necessary precondition of good strategy.”

Civilians caught in conflict continued to suffer on a huge scale. Increasingly, refugees and conflict itself are gravitating towards towns and cities rather than following the traditional pattern of settling in dedicated refugee camps or in border areas. In Sudan, 192,000 people have fled violence since the start of 2016.

Dr. Chipman, added: “This year’s Armed Conflict Survey shows how the character of conflict is changing. As displaced people have moved into cities, so too has conflict. Approximately half of the 36 conflicts featured in the Armed Conflict Survey 2017, and all of the most lethal ones, have a significant urban component. If in the past the typical insurgent fought in the mountains, forest or jungle, today she or he is as likely to be found in an urban setting. This poses particular challenges for aid agencies as they look to track and support displaced people, and for armed forces as they battle insurgents.”

This year’s edition of Armed Conflict Survey also demonstrates how United Nations peacekeepers are finding it more challenging to meet rising expectations. Professor Mats Berdal, of King’s College London, argues the annual peacekeeping budget of $8 billon is under significant strain as UN troops contend with a surge in the number of global operations.

Research by Professor Elizabeth Wood, from Yale University, also shows that conflict-related sexual violence (CRSV) is more likely to be perpetrated by state groups than rebel forces. She argues policies can be effectively tailored to address specific patterns of CRSV in individual conflicts.
The Armed Conflict Survey contains detailed analysis of thirty-six of the world’s high-, medium- and low-intensity conflicts. It also includes thematic essays by prominent scholars of conflict studies examining key issues for policymakers to emerge from current conflicts:

— The Changing Foundations of Governance by Armed Groups

Faux-pas: Macron’s Candidate in the 9th Legislative District – Which Covers Morocco -- Is Pro-Polisario