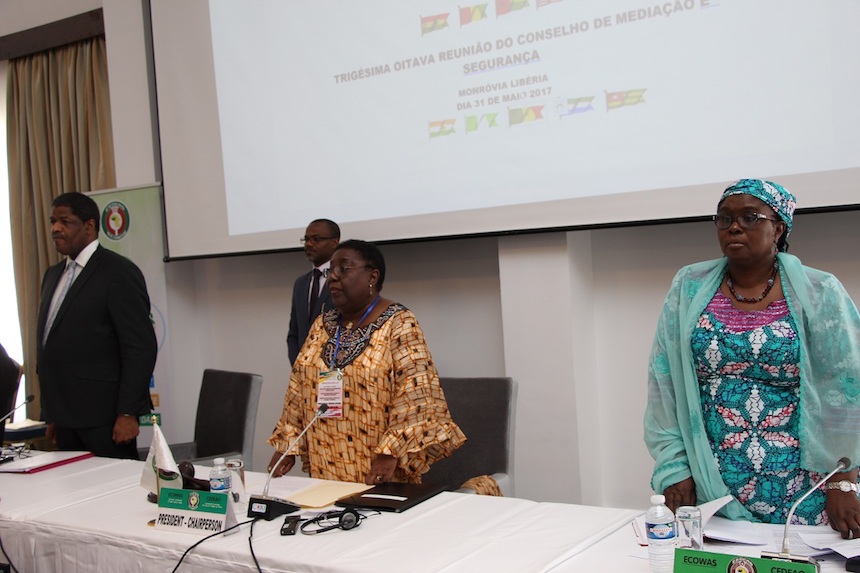 Liberia’s Foreign Affairs Minister and Chairperson of the Council of Ministers of the Economic Community of West African States (ECOWAS), Marjon Kamara, applauded the positive results the regional organization achieved in recent years with regard to the consolidation of peace and security in West Africa.

In her opening address, last Wednesday, in Monrovia, Liberia, to the 38th Meeting of the ECOWAS Mediation and Security Council (MSC), Kamara commended the Commission’s management and staff for these achievements, which in her words, continue to honor ECOWAS.

“Currently, our organization enjoys great recognition for both the decisive and key positions of responsibility assumed by ECOWASleaders, and equally for the strategic use of military resources in the interest of peace, stability and security of its citizens,” noted Kamara.

In addition to these positive developments, Kamara also reviewed the security and political challenges facing the region.

She referred in particular to the non-implementation of the Conakry Agreement in Guinea Bissau, with negative impacts on the country’s socio-political and economic situation; terrorist attacks in the Lake Chad region; humanitarian crises, internally displaced persons and refugees, including transhumance in West Africa.

Some of these issues, and many more, had been addressed by the ECOWAS Commission President, Marcel de Souza.

On Burkina Faso, de Souza underscored the efforts undertaken by the authorities to tackle the deteriorating security situation in the northern part of the country, especially at the border with Mali, a region which saw attacks by many terrorist groups.

He also mentioned the numerous mutinies in Cote d’Ivoire by soldiers demanding the payment of bonuses as part of the Ouagadougou Agreement, and commended President Alassane Ouattara for peacefully handling the crisis.

De Souza echoed Kamara in expressing satisfaction at the peaceful resolution of the post-electoral crisis in The Gambia.

“The real work is now beginning in The Gambia, as we are expected to achieve three main objectives, namely initiating the security and defense sector reforms, reviving the national economy, and promoting national unity and the reconciliation of all Gambians,” stated de Souza.

De Souza also recalled the difficult reconciliation among the people of Guinea Bissau despite the numerous initiatives by ECOWAS for several years, the efforts by Nigeria to defeat the terrorists of the Boko Haram group, as well as the occupation of 2/3 of the Malian territory by Islamists.

With respect to Mali, he announced the forthcoming international conference on the fight against terrorism in West Africa, aimed at discussing a regional strategy to restore peace in Northern Mali.

“If nothing is done in Mali, the security situation will deteriorate and destabilize the whole West African region. In that country, we don’t need a Peacekeeping Force, but rather a peace enforcement force because we first need to create peace before maintaining it,” disclosed de Souza.

On Niger, he noted that the country is facing a difficult situation with Boko Haram in the South, jihadists, and pro-Azawad loyalists in the West, and many refugee camps in the Western and Southern part of the country.

Regarding the promotion of peace and democracy in the region, de Souza outlined the initiatives of the regional organization to support Liberia during the October 2017 presidential elections.

He equally welcomed the progress made by ECOWAS in the establishment of the Zone E and F Multinational Maritime Coordination Centers, and the West African Regional Maritime Security Center.

During this meeting holding behind closed doors, the participants will consider a report and three memoranda, and listen to a series of presentation.

The Mediation and Security Council is made up of Ministers of Defense, Security, and Foreign Affairs of ECOWAS member states.

Faux-pas: Macron’s Candidate in the 9th Legislative District – Which Covers Morocco -- Is Pro-Polisario