Global migration may be one of the most powerful drivers of democracy, simply by letting people move, work, and share what they earn. Likewise, the remittances that immigrants send to their countries of origin facilitate protest, undermine authoritarian electoral mobilization strategies, and tip the balance of power towards the citizens who are mobilizing for democratic change.

This is the central argument of the book Migration and Democracy: How Remittances Undermine Dictatorships, co-written by Abel Escribà-Folch, a professor with the (Universitat Pompeu Fabra Barcelona) UPF Department of Political and Social Sciences and coordinator of the Institutions and Political Actors Research Group, along with Covadonga Meseguer (UNED) and Joseph Wright (Pennsylvania State University).

The fact that these remittances are decentralized, and that it is the people who send and receive these resources, is crucial to increase the likelihood of protests and reduce electoral support for dictatorial regimes

The book has recently been published by Princeton University Press, and its implications were also covered in the article “Global Migration Drives Global Democracy. How Workers Abroad Weaken Dictators Back Home”, which the same authors published in early June 2021 in the journal Foreign Affairs.

The work, introduction and conclusions apart, is structured around six chapters in which various aspects related to remittances are analysed: their influence on dictatorships and on the revenue and expenditure of authoritarian governments, how they affect degrees of protest against and opposition to the regime, their influence on electoral behaviour, also how they affect the chances of democratization, and how they differ from social remittances. 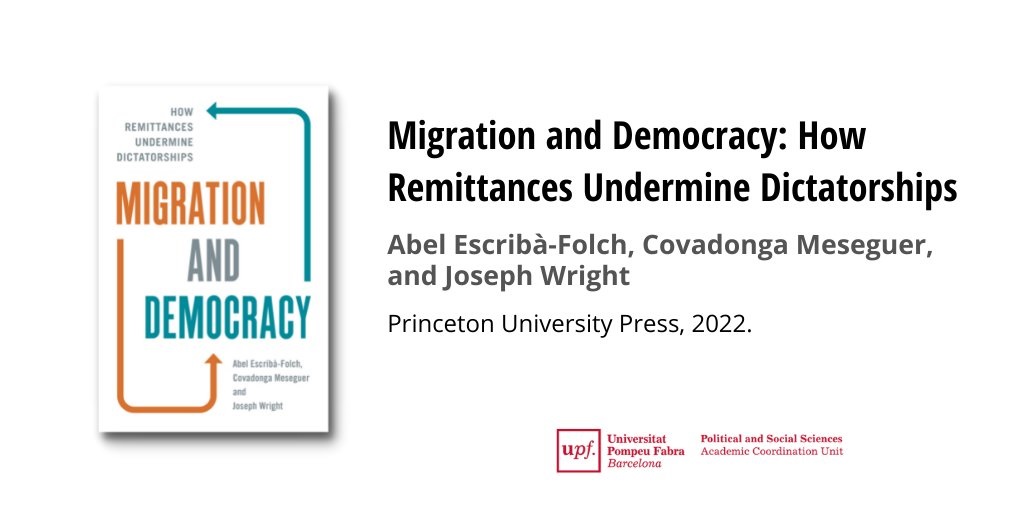 The authors combine global macro-analysis with individual-level microdata and case studies, such as Senegal and Cambodia, to show that remittances –and the movement of people from authoritarian nations to higher-income countries– favour democratization processes in the receiving countries. According to the authors, the fact that these remittances are decentralized, and that it is the people who send and receive these resources, is crucial to increase the likelihood of protests and reduce electoral support for dictatorial regimes.

The debate on conventional politics often dismisses the way migrants shape political outcomes in their home countries: “Migration has been shown to have financial benefits both for those who move and for those who stay, but there is less consensus regarding the political implications of migration. Based on our results, we believe that policymakers of the countries that accept migrants and uphold democracy abroad should start addressing the two issues in a combined manner”, the authors argue.

They estimate that remittances reached a record high of $548 billion in 2019, making them the largest source of foreign funding in the countries of the Global South, three times more than official aid for development. They claim that even during the covid-19 pandemic, these payments have proven to be stable and resilient: according to the most recent estimate, the world total fell by just 1.6% in 2020, far less than foreign direct investment.

The exchange of ideas and income promotes democratization

The authors stress the fact that the exchange of ideas that occurs when immigrants settle in advanced democracies may also have democratizing effects in their home countries. “Those who return bring acquired values, and even those who stay abroad pass on their political attitudes to family and friends. These ‘social remittances’ promote democratic values and participation, even among citizens who never leave home”, they assure.

“Those who return bring acquired values, and even those who stay abroad pass on their political attitudes to family and friends”

But it is not only the person-to-person exchange of ideas but above all the sending of money that relates migration to democratization: “Monetary remittances go straight to individuals and communities, largely avoiding control by autocratic governments, which foreign aid and investment cannot do”, they stress.

The book explains how these remittances empower citizens who demand democracy in migrants’ countries of origin, as they serve as resources to mobilize political opposition (through the organization of demonstrations, for example).

From the analysis of data from the Afrobarometer survey of 17 African countries ruled by autocratic governments in the past two decades, the authors show how the likelihood of recipients of remittances participating in protests in districts of the opposition rises above 15%, while it is less than 10% among citizens without this additional income.

Research that expanded to the global scale

Abel Escribà-Folch, Covadonga Meseguer and Joseph Wright also analyse aggregate data from countries on a global scale, with results that reinforce the results at micro level. They examine data from 130 autocratic regimes in 84 countries over the past four decades, aggregating information from protest datasets around the world, and find a positive relationship between the volume of remittances received and the frequency of anti-government protests.

These remittances, furthermore, lower the effectiveness of clientelism as a tool for electoral mobilization, thus reducing the electoral support received by the official parties of the regime. “Global migration funded the kind of political action that has most helped lead to peaceful democratization over the last quarter of a century”, the authors conclude.

Snowfall in the Sahara Desert: An Unusual Weather Phenomenon