In the last five years, South Africa, Botswana, Namibia and Swaziland have all been on the verge of eliminating malaria. In fact, progress had been so good that the southern African region had been tipped to be malaria free by 2018. But a spike in cases this year means that it’s unlikely to meet the target. A new target has been set for 2020. The Conversation Africa’s Health and Medicine editor Candice Bailey asked Professor Rajendra Maharaj to explain why.

Why has there been a spike in malaria cases in southern Africa? Is it unusual?

Over the last few years there has been a downward trend in the number of malaria cases globally. There was a marked decrease in cases in South Africa and in several other countries in the region including Swaziland, Botswana and Namibia. This trend was so encouraging that the region had become comfortable with the idea that it would reach the target of eliminating malaria by 2018. South Africa, for example, experienced a serious epidemic in the 1999/2000 malaria season where over 62 000 cases were recorded but with reinforced interventions, the cases decreased to under 5 000 in 2016.

The countries in the region achieved this by implementing evidence-based indoor residual programmes and improving diagnostics and treatment, introducing artemisinin-based combination therapy.

But this year figures in some parts of South Africa were triple what they were last year. The reality is that in only some parts of the country will we have eliminated malaria. Although the number of cases reported from KwaZulu-Natal increased, it’s still possible to reach the 2020 goal but the same can’t be said for Mpumalanga and Limpopo. These two areas receive many imported cases from Mozambique and Zimbabwe.

This spike is not restricted to South Africa. It has happened in all southern African countries. But the increase has been the greatest in Namibia and Swaziland.

We have yet to confirm what caused the spike in the region. We know that the mild winter conditions created fertile ground for mosquito breeding. But we still need to understand what’s behind the increase in cases so that we can tackle the problem.

There are many questions. For example, was there a failure in the case management? Was there a relaxed attitude to implementing all the planned interventions? We still need to answer these questions. There are several possible reasons for the spike.

One possibility is the sub-optimal insecticide spray coverage contributed to the increased transmission. Another is the Malaria Control Programme was ill prepared for the epidemic. At one point this year there was as shortage of drugs in the province and these had to brought in as a matter of urgency after the epidemic struck.

A third possibility is that with heavy rains preceding a very dry period, there were many suitable pools for breeding and the hot conditions were ideal for mosquito breeding.

How does the region handle malaria control currently. Are there weaknesses in the strategy?

To control malaria, countries in the region use one of two strategies: indoor residual spraying (IRS) and the use of Long-lasting Insecticide Treated Nets (LLINs). These are either used in isolation or as part of an integrated programme. South Africa uses indoor residual spraying and little larval control measures that targets the breeding sites of mosquitoes. In Swaziland, Botswana and Namibia the focus has been on indoor spraying but net coverage has achieved high levels in these countries. 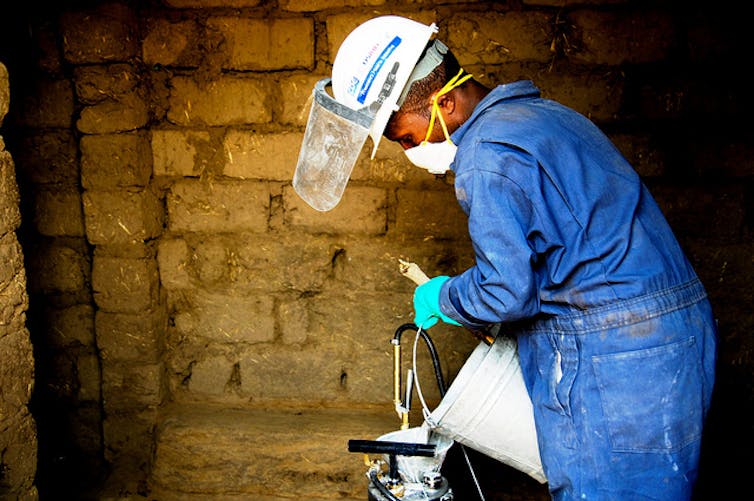 The World Health Organisation recommends the use of integrated mosquito control where more than one method is used.

What are the other challenges in controlling malaria in the region? And why does the focus need to change?

In areas where there’s been high levels of transmission, it was found that the spray coverage for insecticides recommended by the World Health Organisation wasn’t optimal. It’s recommendation is that 80% of the houses in a malaria infected community should be sprayed. But the region is not achieving this coverage.

Another cause for concern is that there are an increasing number of people refusing to have their homes sprayed with insecticide. This may be due to a lack of awareness of the need to have the houses sprayed. The reasons for this are unclear, but its suspected to be linked to the disease burden being low.

Participating in the indoor residual spraying programme is purely voluntary. People can’t be forced to have their homes sprayed as there is no legislation in place to compel them to have their houses sprayed. If people refuse, there’s nothing that can be done except to educate the homeowner to gain permission to spray.

DDT is the cheapest insecticide. It has a long residual life on the market and as a result countries with limited resources use it as a tool to control vectors. There is very little resistance to DDT in the region but there is enormous political pressure to move away from using DDT.
What is needed in these countries are robust public awareness campaigns informing people that, even when there have the is no disease, malaria can resurge as long as there are vector mosquitoes in the area.

There is evidence from developing countries in other parts of the world that elimination can be achieved. Sri Lanka is the latest country to achieve elimination. They had a very strong vector control programme that succeeded in reducing the caseload significantly. Once this was achieved proper case management further reduced the case numbers.

And when there were no local cases an intensive surveillance programme was implemented. Although elimination was achieved, entomological surveillance and disease surveillance was strengthened.

Somaliland’s Voting Technology Shows How Africa Can Lead the World