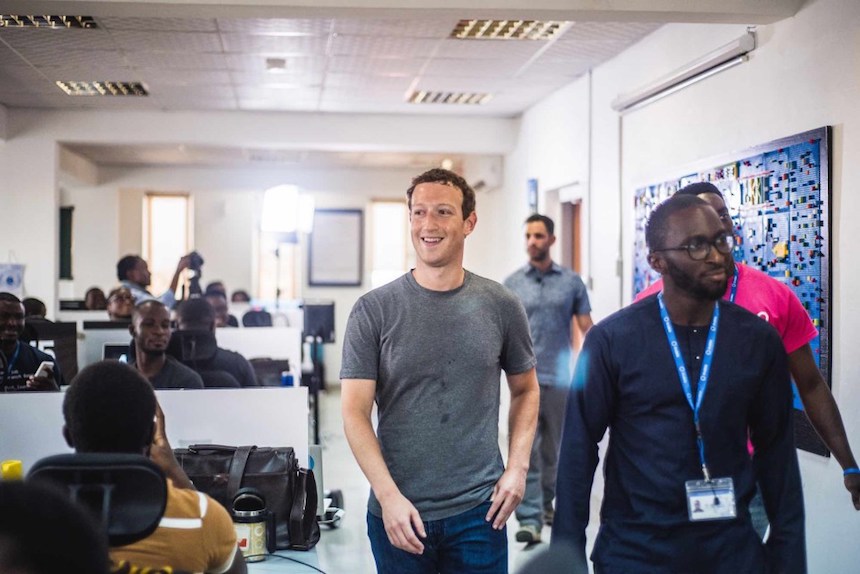 Next year, Facebook will launch an incubator program in partnership with Lagos-based Co-Creation Hub (CCHub) to help develop tech startups and train 50,000 Nigerians in digital skills.

Facebook’s announcement comes after Google CEO, Sundar Pichai, said during his visit to Lagos in July that the company would open its first Google Launchpad space outside the United States in Lagos. True to its word, a Google Launchpad Start event – a one week boot camp for early stage startups – was held last month in Lagos hosting twenty-one tech companies.

In 2016, Facebook founder and CEO, Mark Zuckerberg visited technology companies in Lagos and pledged to invest $24 million through his Chan Zuckerberg Initiative in Andela, a Lagos-based startup that trains software developers.

This influx of global technology giants into the Nigerian tech ecosystem does not come as a surprise. According to the Nigerian Communications Commission (NCC), there are now ninety-one million internet users in Nigeria. Nigeria is also Facebook’s largest market in Africa with twenty-two million people in the country using the social media website every month, and ten million logging in daily to the platform on mobile devices.

Major obstacles to technology penetration in Africa include poverty and poor telecommunications infrastructure. This means that a large number of people cannot afford high-end mobile phones and computers that support popular applications; in addition to slow internet speeds which result in fewer people surfing the Web for longer periods of time. Facebook tried to tackle this problem by introducing Facebook Lite, a version of Facebook built specifically to work smoothly with poor data connections and low-end phones in 2015. It was designed for developing countries like Nigeria and seven other emerging countries. Facebook Lite might be responsible for the surge in Facebook’s popularity in Nigeria.

Other tech companies like the Ghanaian-based Meltwater Entrepreneurial School of Technology (MEST) and Venture Capital for Africa (VC4Africa) have also plugged into the Nigerian tech startup market. MEST opened its first incubator in Lagos last month and has invested more than $20 million in African entrepreneurs, while VC4Africa, a platform that connects entrepreneurs to funding and resources has emphasised African developed technology, from Nairobi to Lagos. VC4Africa’s business development lead, Bertil van Vugt said, “we’re now really starting to see the quality [of Nigerian start-ups] …I spent some time in Nairobi a couple of years back when it was really the start-up capital of Africa but we’ve seen this start-up capital focus shift to Lagos.”

According to Quartz, Nigeria attracted more startup funding than anywhere else in Africa in 2016, beating South Africa and Kenya, two other leading tech startup markets in Africa.

This also comes at a time when the Nigerian tech ecosystem is looking beyond Lagos, which has been the country’s center of technological innovation for the past few decades. Mark Essien, the founder of hotels.ng – a leading travel and hotel booking site – who had to move to Lagos for his company to receive seed funding, is one of the individuals spearheading this movement. According to him, “it is very important… [that] somebody can stay in Aba and say that ‘I want to build a technology company’ and have all the resources necessary to be successful at their disposal without having to leave for Lagos.”

Another start-up founder, Korede Moshood, founder of Comestibles, which offers food delivery services in Ibadan said “The Lagos market is really getting choked day by day and as a new start-up, you could get fried if you initially expose yourself to the highly competitive market in which Lagos start-ups operate.”

Why Anti-Tobacco Messages Are Failing to Reach Rural Botswana