Researchers began by gathering the cross-section of field studies needed to evaluate a range of performance indicators measuring the effectiveness of SSNM versus existing farmers’ fertilization practice. They identified 61 studies across eight countries in Asia and three countries in Africa to produce the nearly 400 direct comparisons of the two fertilizer management practices for maize, rice and wheat.

Key results drawn from the study show that SSNM generated 12% higher yield and 15% greater profitability compared to farmer practice. SSNM produced these benefits while saving an average of 18 kg N/ha, which is equivalent to a 10% reduction in the amount of N fertilizer, reducing risk of N loss to the surrounding environment.

Achieving triple-wins of high yields and profit in combination with lowering nutrient losses are not elusive or conflicting goals.

We know of no other agronomic intervention that has increased crop yield, profitability, and N use efficiency across these cereal crops and geographies in such a robust manner, explain the study’s authors. SSNM – through field-specific tailoring of fertilizer applications – is a highly effective management strategy that maximizes positive outcomes, contributing to food security attainment with economic and environmental benefits.

In the vast majority of smallholder cropping systems, fertilization consists of unbalanced nutrient application using “blanket” approaches that are not best designed to address the effects of the variability that exists within even the smallest plots of rice, wheat, or maize. Failing to adequately manage for this variability often results in the inefficient use of fertilizer by crops with poor outcomes for farmers.

The study demonstrates how the effectiveness of SSNM can vary across crops, cropping systems, crop management, and growing environments. The benefits of SSNM appear most significant where the performance of farmers’ practice is relatively poor. 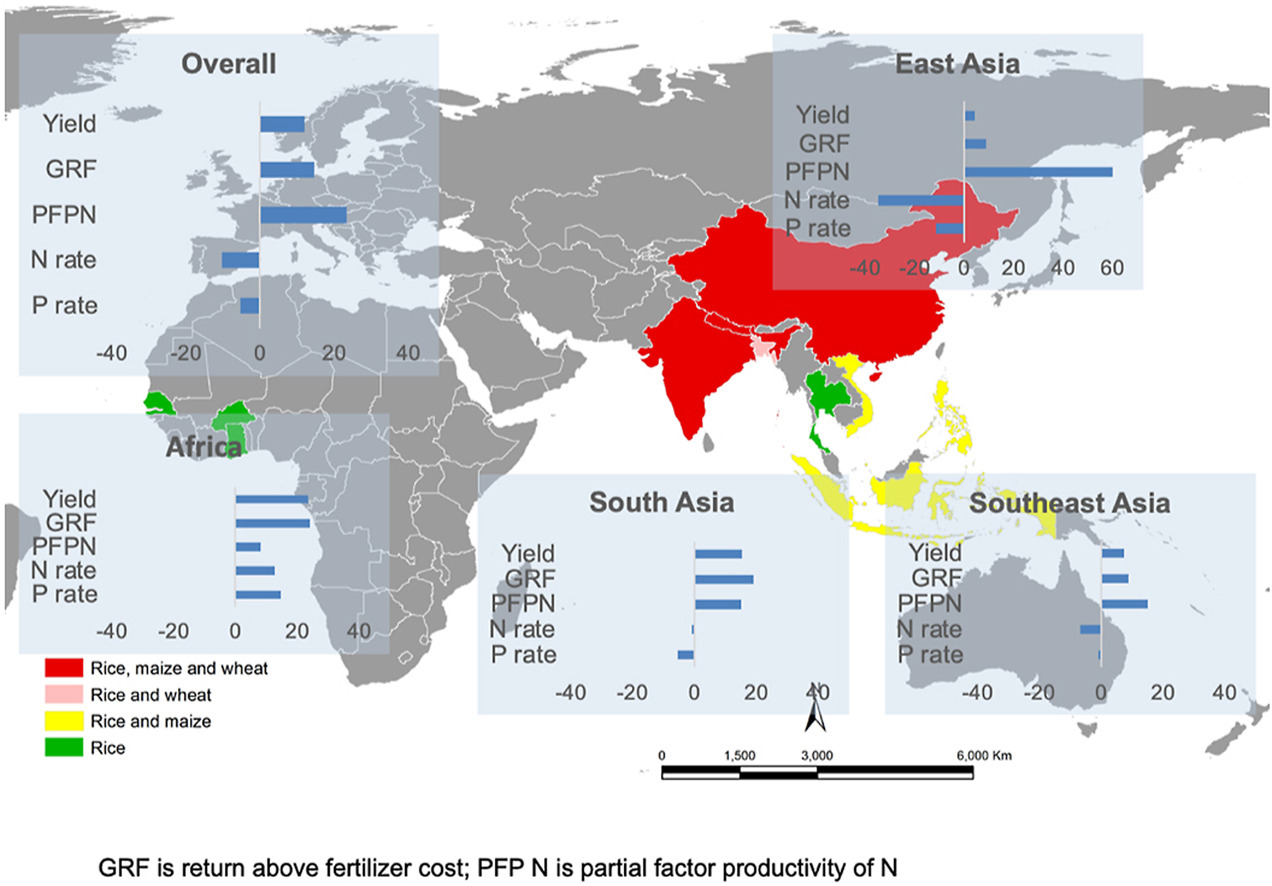 Smallholder’s benefited from the ability of SSNM to detect and correct long-standing nutrient input inadequacies or imbalances. SSNM prescribed higher frequencies of N application more often, which improved plant N uptake by better targeting the growth periods when demand was highest. Examples of improved outcomes came with lower N and P application rates and higher K rates in the traditionally higher input systems in Asia. SSNM commonly raised recommendations for N, P and K in Africa. A host of regional factors related to infrastructure, supply chains, government policy, and missing or poor farm advisory systems are attributed to the numerous examples of over and under application of nutrients across the range of studies selected.

Research into SSNM produces viable strategies for smallholder cropping systems. However, widespread adoption remains a significant challenge that requires concerted efforts to scale up SSNM and reach the potentially millions of farmers who work across fragmented landscapes, and who commonly lack access to existing support systems. Researchers found it particularly difficult to gather suitable African studies to fit the criteria of the analysis, which suggest much is yet to be done to explore SSNM within the continent.

Promising innovation continues to be made towards the effective delivery of individualized recommendations through digital communication technologies, for example by a mobile phone. However, the study suggests that progress towards more widespread adoption might be less dependent on hard evidence than on governing policy interests that, for example, place more importance on fertilizer subsidies that inhibit change. More work is needed on outreach towards—and partnership amongst—stakeholders that are motivated to create more SSNM-enabling environments within the crop production chain.

South African Enterprises Can’t Ignore the Risk of Cyber Attacks: the Threat Is on the Rise