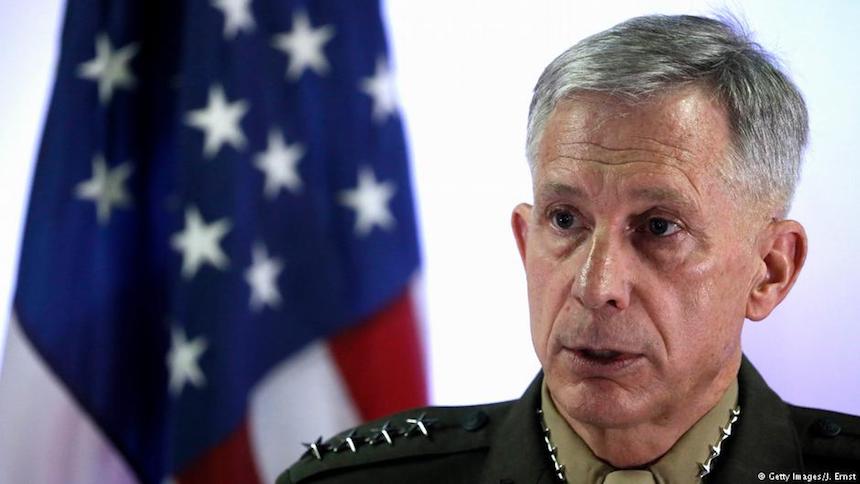 AFRICOM Commander General Thomas D. Waldhauser was in Brussels to meet with the European Union (EU) Chiefs of Defense (CHODs) and discuss the current state of affairs in a number of African countries. Several terrorist groups, including Islamic State (IS), Boko Haram, and al-Shabaab have been operating in many regions, although each has suffered setbacks in the past few months.

DW:Overall, is AFRICOM and its partner governments experiencing success in pushing back terrorist groups such as IS, Boko Haram and al-Shabaab?

General Waldhauser:One of the key parts of what we try to do at AFRICOM is to develop the capacity and capability of African partner nations which will allow them to take on these problems themselves – in other words Africans solving African problems. So in places like Somalia we train and advise the military so that they are able to take on these threats themselves.

DW: We know about the pushback efforts against IS but how much of a presence do they have across Africa at the moment?

Waldhauser: IS is present across the continent in various degrees. If you take Libya for example there was a significant presence in Sirte six to eight months ago. In fact they owned the city for quite some time. But since we struck IS in the desert again in the middle in Januarythe numbers are now small. They do not own any major territory but they continue to be an issue for us. We also continue to watch other parts of the continent, whether it’s IS in West Africa or in the Lake Chad Basin region. But our role there is to provide training for the Lake Chad Basin region countries to take on that problem themselves. So IS is in various locations across the continent. We continue to watch them while keeping in mind that the core threat is in Iraq and Syria. We also take the opportunity to build relationships with our partner nations to take on those targets.

DW: Let’s look at Somalia. Of course there was a recent tragedy in which a member of the US military was killed for the first time since 1993. Piracy is also on the rise there. So overall what does Somalia look like?

Waldhauser: The tragic death of Senior Chief Petty Officer Kyle Milliken here a couple weeks ago underscores the fact that you know the missions that are going on to train and assist inside Somalia are dangerous. It is the first death in quite some time in Somalia and it is tragic. On the issue of piracy I wouldn’t go so far as to say there’s been a groundswell or a significant uptick in piracy. There’s been a handful of events over the last month that we have to watch closely. The European Union (EU) plays a big role in this because they actually have ships in the region to deal with this problem. But it is too early to say that it’s a significant rise and we have a problem on our hands.

DW: In Uganda they have officially closed the pursuit of Joseph Kony of the Lord’s Resistance Army (LRA). I understand that the U.S. didn’t necessarily think it was such a good idea to formally announce they were ending the hunt for him. What’s going on in Uganda at the moment?

Waldhauser: Stability. I think it’s no surprise that last month the mission to specifically hunt Joseph Kony came to an end.The LRAmovement has been reduced down to 100 or so from perhaps a thousand at its peak. Although we did not get Kony himself, we know he’s on the run. Perhaps at some point he will be caught. But there comes a time when the mission has run its course and we are now transitioning to a steady state. We hope to continue to work with those countries who have been a part of that overall Kony mission. But the time has come for us to move forward. We’re not overly concerned about a [security] void. That was a big part of considerations when we finally closed the mission down. But if we stay on top of it and have a smooth transition plan I think we’ll be ok. We’ll just continue to monitor as we go.

DW: What about Libya? If you look at it from the outside it still seems like such a huge mess.

Waldhauser: Libya continues to be a challenge, but I would say that if you look at it from the standpoint of this time last year, there are some positive things which have happened. Obviously IS no longer control Sirte. Their presence in the country is still there, but it’s been reduced to really just survival mode. I think another key thing to point out is the recent meeting between rival leaders General Khalifa Haftar and Fayez Serraj. All of our partners have tried to get these two to come together and lay the basis for an agreement. So we have to take that opportunity and see how we can turn that into a positive. We’ve said all along that there’s no military solution in Libya. There is a political solution. And this is what a political solution looks like.