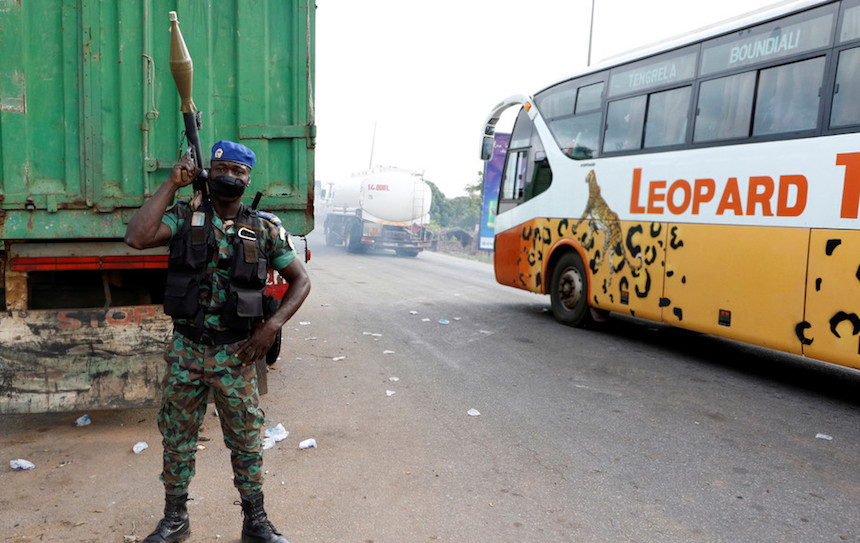 Dissatisfied ex-combatants who aren’t serving in Côte d’Ivoire’s formal military structures pose the biggest long-term threat to the stability of the country. This is particularly true in regions where groups of these men were present during the civil wars.

The Ivorian government set out to integrate only about 8,400 ex-combatants into the national army. The majority of ex-combatants were supposed to go through a regular disarmament, demobilisation and reintegration (DDR) programme. The programme was designed to remove weapons from combatants and take them out of military structures by helping them to integrate socially and economically into society.

The UN claims that the programme in Cote d’Ivoire has been successful. But recent protests and reports of disorder perpetuated by ex-combatants in Bouaké are evidence that the process hasn’t been seamless. Former combatants – particularly those who weren’t enlisted in the army – continue to pose a threat to the country’s stability.

But the government’s efforts at integrating former combantants into the national army hasn’t worked particularly well either as was evident recently when they mutinied. Their demand for financial bonuses, which they said had been promised to them, was only resolved after the government offered to pay them a total of about $12,000.

This had a ripple effect, and set off a new wave of violence by ex-combatants enrolled in the disarmament, demobilisation and reintegration programme. They too wanted payment from the government.

The reason for these episodes is therefore down to the different incentives and opportunities offered to both groups.

Research into the disarmament, demobilisation and reintegration programmes has highlighted some serious flaws. The programmes don’t sufficiently address the destitute state that ex-combatants find themselves in. This problem doesn’t just affect Côte d’Ivoire. It’s been a recurring issue in conflict affected societies where similar programmes have been applied, such as Nigeria, Nepal and Angola.

Côte d’Ivoirian ex-combatants that carried out the recent protests aren’t interested in the disarmament, demobilisation and reintegration programme. This is because many of them face an uncertain future with dim job prospects. And their situation seems much worse than their compatriots who have been integrated in the military, securing jobs and financial rewards.

This issue needs to be addressed to reduce the risks of conflict recurrence and instability in Côte d’Ivoire.

Research shows that cash payments, known as reinsertion grants, are an important component of these kinds of programmes. Payments ensure that ex-combatants don’t burden their families and communities. In some instances, this is a one-off grant. In most cases, ex-combatants get an agreed sum that could last up to 12 months. In Nigeria ex-combatants have received monthly payments for more than five years. But this is an exception.

In addition to these financial payments, ex-combatants receive vocational training. In principle, the grants are terminated at the end of it. Ex-combatants are expected to find jobs based on the skills they have gained. The results have been mixed. UN reports that many ex-combatants gained new skills but that these didn’t translate into employment for all of them.

The first programme in Côte d’Ivoire was part of a UN resolution to facilitate the reintegration of ex-combatants that participated in the first Ivorian civil war.

The plan stated that ex-combatants would be entitled to a reinsertion grant of 499,500 CFA (USD$850) over a period of six months. At the end of demobilisation, ex-combatants interested in resuming studies would receive an additional education grant. Those interested in entrepreneurship or agricultural projects would receive micro-credit loans ranging from $170 to $300 per individual.

Violence broke out again in 2010 after Laurent Gbagbo refused to step down after losing the presidential election to Alassane Ouattara. Many ex-combatants rejoined armed factions, such as the Forces Nouvelles, to fight in the second war. This created the need for a new programme.

Once he was in office Ouattara implemented reforms to manage the armed groups that had been active in the second war. These included the integration of some rebel factions into the national army based on an agreement between the rebels and the Ivorian government. This was followed by the establishment of the Authority for Disarmament, Demobilisation and Reintegration. Its focus is on ex-combatants who were not integrated into the national army. It provided transitional financial support and vocational training to facilitate their reintegration back into society. Under it, at least 90% of 74,000 ex-combatants were disarmed, demobilised and reintegrated.

But the recent incidents show that there are many groups that are dissatisfied and that there is still instability within the armed forces.

It is important for the Ivorian government to design appropriate policies that reorient ex-combatants towards meaningful reintegration instead of renegotiating cash payments as a reward for their participation in the civil war.

In Colombia, for example, new approaches that connect economic, political and social reintegration are beginning to take root. These allow ex-combatants to participate in issues such as environmental conservation and protection that are important to their communities, while earning a living.

This approach could prove useful in places such as Côte d’Ivoire as the country rethinks its reintegration programme. This is because reintegration is not just about finding jobs, but also about finding meaning and connecting ex-combatants to a purpose beyond the individual.

The DRC Can Learn from Lumumba as Its Internal Crisis Deepens