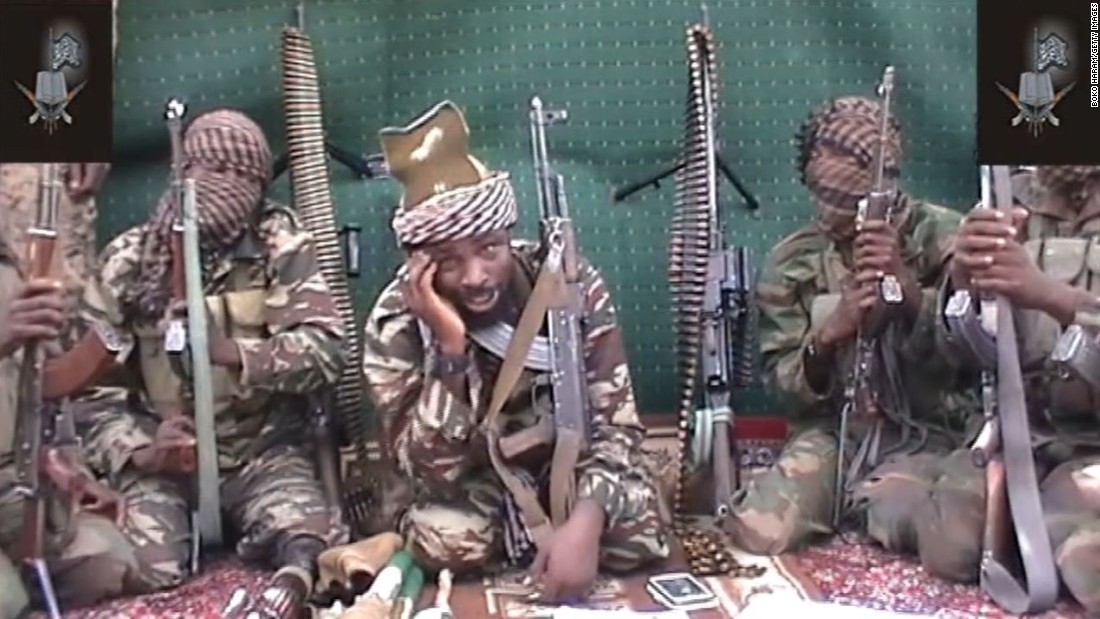 Editor’s Note: Boko Haram is one of the most violent, and least understood, militant groups in the world. Despite this bloody record, many counterterrorism policymakers and analysts misrepresent the group’s history and ambitions. Alexander Thurston, my colleague at Georgetown, has an awesome new book on Boko Haram (buy it here). He gives us a quick look at some of his research, helping dispel some of the leading myths surrounding the group.

Recent years have brought a spate of publications about the Nigerian-born jihadist movement Boko Haram. Many of these publications are works of serious scholarshipand journalism, and there are innovative new works in the pipeline. Nevertheless, key misconceptions about Boko Haram persist, particularly in non-scholarly publications, journalistic treatments of the group, and policymaking. With my own book on the group recently released, I want to dispel some of these myths.

Myth #1: Boko Haram Turned to Violence Because of Government Repression

Many accounts simplify Boko Haram’s history. They describe two basic phases: the movement’s career as a mass-based preaching movement until 2009, and its transformation into a jihadist movement after its July 2009 mass uprising and an ensuing government crackdown. Many accounts describe 2009 as the year that Boko Haram became violent, identifying a clash between Boko Haram members and law enforcement as the trigger for the July 2009 uprising.

The problem with this version of events is that a segment of Boko Haram, or what became Boko Haram, was involved in an earlier uprising in December 2003 in rural northeastern Nigeria. After that event, the movement’s founder, Muhammad Yusuf, partly rehabilitated himself within northeastern Nigerian society and even with certain politicians. He eventually reintegrated some youth who survived the uprising back into his movement.

In the lead-up to both the 2003 and the 2009 uprisings, there were tense and complex interactions between Boko Haram and local politicians. Certainly, in both instances, Boko Haram felt provoked by the authorities. Yet Boko Haram also played a major part in escalating the tensions that led to violence in both cases: Using violent rhetoric, stockpiling weapons, and conducting paramilitary training, Boko Haram prepared for conflict and made authorities skittish. Blame for Boko Haram’s turn to violence, in other words, must lie with both sides, and the majority of the blame lies with Boko Haram.

Some observers seem to assume that because Nigeria has an infamous and far-reaching problem with corruption, and because Muhammad Yusuf preached against the Nigerian state, that Yusuf must have been preaching against financial corruption. But in the surviving videos and recordings of his preaching, as well as in his 2009 Arabic-language manifesto, Yusuf was not primarily concerned with stolen money. In fact, if allegations of Yusuf’s early deal-making with mainstream politicians are true, then he may have been all too willing to overlook—and even benefit from—the entrenched corruption around him.

His argument to his followers, rather, was that the Nigerian state was fundamentally illegitimate. For Yusuf, any state that uses a constitution and a legislature, as well as any system that enshrines democracy and secularism, was anathema. The state, in his eyes, was a system that competed with worship of God and with the implementation of God’s law.

In terms of its doctrines, then, the early Boko Haram was not a reformist social movement but rather an anti-systemic movement. Boko Haram demanded alternatives to the Nigerian state, and even to Nigeria itself. There was an early period (roughly 2001-2005) when Yusuf worked with local politicians and the government of his home state, Borno; he even served on a government committee on shari‘a in 2001 amid the wider popular upsurge in enthusiasm for implementing “full shari‘a” in northern Nigerian states after 1999.

But by 2006, Yusuf was withdrawing from mainstream politics. In his preaching and his public statements, Yusuf wavered about methods. Sometimes, he espoused a kind of quietist rejectionism, saying he was willing to live under secularism even though he opposed it. Toward the end of his life, he openly embraced jihadism and the idea of violent change. But he never suggested that greater transparency or anti-corruption measures, on their own, would address Nigeria’s problems.

Myth #3: Boko Haram Was an Affiliate of al-Qaeda Before Joining the Islamic State

In August 2009, after Boko Haram’s uprising failed and Yusuf had died in police custody, his successor, Abubakar Shekau, made contact with al-Qaeda, writing to a sub-commander within al-Qaeda in the Islamic Maghreb (AQIM) and even writing to Osama bin Laden himself. Years later, in March 2015, Boko Haram, under Shekau, pledged allegiance to the Islamic State.

What happened between those two dates—and in particular, the extent to which the contact and collaboration between Boko Haram and AQIM subordinated the former group to the latter’s agenda—remains partly unclear. A significant amount of precious new evidence has emerged in recent years, showing not only the correspondence between Boko Haram and other jihadists but also confirming that Boko Haram received funding and training from AQIM. At the same time, this evidence shows that Shekau was impossible for al-Qaeda, AQIM, or even the AQIM sympathizers within Boko Haram to control. (The Islamic State would later confront the same problem, which is one reason why they eventually handed the “governorship” of their “West Africa Province” over to another man, Abu Mus‘ab al-Barnawi, in summer 2016.) The mounting evidence pushed me, despite my strong initial skepticism, to acknowledge and begin to analyze the ties and exchanges between Boko Haram and AQIM.

From the beginning, some analysts—most vocally, those associated with right-wing think tanks and lobbying groups—have advocated a maximalist interpretation of the ties between Boko Haram and AQIM. In doing so, they have often fudged reality, insinuating that Boko Haram was a formal affiliate of al-Qaeda, or that AQIM called the shots for Boko Haram or for an AQIM-backed splinter group, Ansar al-Muslimin fi Bilad al-Sudan (better known as Ansaru). But the process of becoming an affiliate of al-Qaeda is long and formalized, and that process was never finalized with Boko Haram. Whatever the extent of the ties was, it never reached the level of a formal, public merger or affiliation.

Myth #4: Boko Haram Has Been Defeated

It is natural and predictable for governments to proclaim that they are on the verge of wiping out insurgencies in their territories (or in other people’s territories). So there is nothing surprising in the Nigerian government’s proclamations that “technically we have won the war” (December 2015), that the “final crushing of Boko Haram terrorists in their last enclave” was at hand (December 2016), or that  “the Boko Haram terrorists have been defeated, all we are fighting for now is the peace in the North East” (January 2018). Yet these statements are premature. True, Boko Haram does not control the same vast swath of territory it did at its peak in late 2014-early 2015. But the group appears far from defeated, both the fighters around Abubakar Shekau and those around Abu Mus‘ab al-Barnawi, who was officially recognized by the Islamic State as its “governor” for West Africa in August 2016. Even the trendline is not all positive: In 2017, al-Barnawi’s faction has mounted a series of attacks on rural military posts and convoys. These attacks have yielded the group arms and have helped it to intimidate soldiers and local civilians alike. Boko Haram seems unlikely to disappear any time soon.

Americans, especially the U.S. government, have been full of suggestions for how Nigeria can and should defeat Boko Haram: Increase socio-economic development programming in northeastern Nigeria. End human rights abuses by security forces. Conduct counterinsurgency, rather than counterterrorism. Involve neighboring militaries in the conflict. Deradicalize prisoners. Talk to Boko Haram. Don’t talk to Boko Haram.

My book offers its own, limited suggestions for a way forward—essentially, I advise experimenting with political techniques such as negotiations, amnesties, reconciliation programs, and accountability measures for combatants, soldiers, and officials alike. Yet I think some basic humility is called for on the part of the United States, which has never faced a domestic insurgency of the magnitude of Boko Haram (unless one counts the Civil War or conflicts with Native Americans, neither of which bears much resemblance to Nigeria’s conflict with Boko Haram).

If Nigerian politicians and military officers, absorbing lectures from their American counterparts about counterinsurgency, socioeconomic development, and human rights, quietly raise an eyebrow, they could be forgiven their skepticism. Sixteen years into the war in Afghanistan, can the United States claim undisputed expertise in counterinsurgency? With the U.N. Special Rapporteur on extreme poverty and human rights recently expressing shock at the conditions he saw in rural Alabama, can America claim perfection at socioeconomic development? With recurring allegations about U.S. military abuses of human rights from Somalia to Yemen to Afghanistan, can America claim that its hands are always clean? Nigerians are not stupid or ill-informed: They watch the news, too.

As I wrote above, the Nigerian state has failed, so far, to defeat Boko Haram—but there are no guarantees that American experts, confidently offering prescriptions from afar (or near, from an increasing variety of coordination cells, special operations deployments, and NGOs), would do any better, even if their prescriptions were followed to the letter. Obviously it’s good for Americans, Europeans, Nigerians, and others to keep thinking about potential solutions. But the solutions are just that: potential. Nigeria is not an equation to be solved like some math problem in a workbook, where the answer is evident if you know how to find it—rather, Nigeria is one of the most complicated countries in the world. Any resolution to the Boko Haram conflict will require a good deal of experimentation, trial and error, and even luck. It may also take quite a long time.

Alex Thurston is Visiting Assistant Professor of African Studies at Georgetown University. His book, Boko Haram: The History of an African Jihadist Movement, was recently published by Princeton University Press.

Protecting Cassava from Disease? There’s an App for That