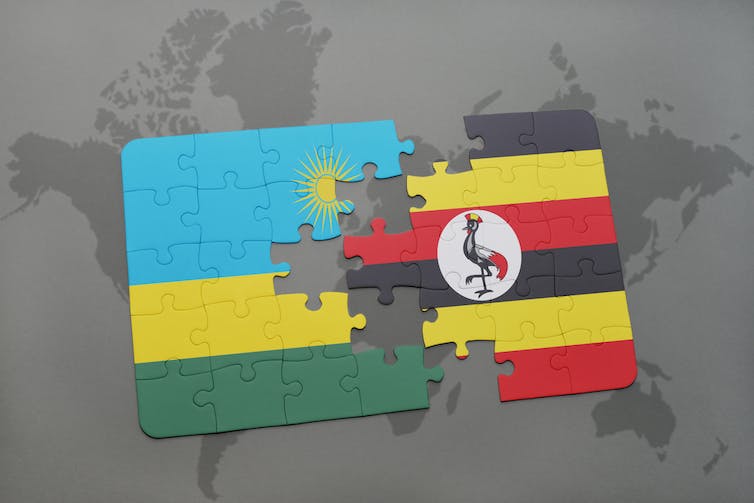 Tensions are mounting dangerously between Rwanda and Uganda. The two African countries historically have been closely linked, with each playing a key role in the other’s political development. But all that is now in peril.

The current Ugandan government, led by president Yoweri Museveni and his National Resistance Movement (NRM), gained power during the Ugandan Bush War (1980-1986) thanks in part to the military assistance of Rwandan refugees who fled their home country when the Tutsi ethnic group was persecuted. Among those refugees was current Rwandan president Paul Kagame, who joined Museveni’s ultimately successful struggle against the government of Milton Obote (1980-1985) and Tito Okello (1985-1986).

Conversely, by providing a refuge for them, Uganda enabled these displaced Rwandan refugees to create what became, in the late 1980s, the Rwanda Patriotic Front (RPF). Additionally, it was thanks to Uganda that the RPF’s military wing, the Rwanda Patriotic Army (RPA), escaped total defeat at the hands of the Rwandan government’s military, the Forces Armées Rwandaises (FAR), following its failed October 1990 invasion of Rwanda. The retreating RPA, led by (then general) Paul Kagame used Ugandan territory to move west and later occupy Rwanda’s Virunga Mountains – and would later fight to stop the 1994 Rwandan genocide (also referred to as the 1994 genocide against the Tutsi).

Since the end of the genocide, Rwanda and Uganda (led by the old comrades-in-arms, Kagame and Museveni) have fought together on several occasions. During the First Congo War (1996-1997), they battled against the Rwandan genocide perpetrators who fled into Zaire (now the Democratic Republic of Congo) after the genocide and helped to overthrew Zairian leader Mobutu Sese Seko. They again fought together during the early stages of the Second Congo War (1998-2003), before turning on each other in the bloody 1999 fight to take control of the Congolese city of Kisangani, which resulted in nearly 3,000 deaths. Since the end of the Second Congo War, relations between the two countries have been inconsistent – although Kagame and Museveni have usually been able to negotiate and reduce tensions.

On March 5, however, poor relations between the two countries come to a head after the Rwandan foreign minister, Richard Sezibera, held a press conference outlining Rwanda’s concerns with Uganda. He briefly closed the border with Uganda and advised Rwandans residing in Uganda to leave immediately. He accused Uganda of arresting Rwandans, disrupting regional trade and of providing support and space for anti-Rwanda groups. Uganda has denied all the allegations.

The final accusation is the most problematic, as the minister specifically accused Uganda of supporting groups such as the Rwanda National Congress (RNC) and the Democratic Forces for the Liberation of Rwanda (FDLR). Both organisations are perceived by Rwandan officials to be dangerously intent on overthrowing the current RPF government and bringing back the ethnic divisions that haunted Rwanda prior to the genocide.

Uganda is not the only country to have been accused of supporting these organisations. Tanzanian president Jakaya Kikwete hosted RNC and FDLR leaders in 2013 and 2014, and Rwanda has also accused Burundi and its president, Pierre Nkurunziza, of sympathising with the FDLR and providing them with public legitimacy.

These recent diplomatic problems are nothing unusual, but the rhetoric has started to move up a gear. During the annual National Leadership Retreat, also known as “Umwiherero”, Kagame said of the mounting crisis with Uganda:

You [Uganda] can attempt to destabilise our country, you can do us harm, you can shoot me with a gun and kill me. But there is one thing that is impossible: No one can bring me to my knees. Men and women of my country, you should never accept to be brought to your knees. You are much better than that.

‘Bring Rwanda to its knees’

The phrase “bring me to my knees” is significant – and relates to the concept of “agaciro”. Typically, agaciro – a Kinyarwanda word meaning self-reliance, dignity and self-respect – is used to describe Rwanda’s economic policies. But it also central to how Rwanda engages with the international community and promotes its state interests.

Seen through the lens of agaciro, Uganda is seriously disrespecting Rwandan dignity by arresting Rwandans and providing assistance to anti-Rwandan government groups that are, at some level, trying to promote genocide ideology.

For those in the Rwandan government who fought against the genocidal regime in 1994, this is unacceptable and indicates a total lack of respect for Rwandan social development and reconciliation. It will not be tolerated and could lead to a serious escalation of the crisis.

What does the future hold?

Easing tensions between the two countries will not be easy without Rwanda believing that Uganda respects its concerns and dignity. When John Magufuli succeeded Kikwete as president of Tanzania in November 2015, he was able to reestablish and strengthen ties with Rwanda by expressing his understanding of Rwanda’s concerns regarding the RNC and FDLR. He understood the importance of agaciro.

President Museveni could now make similar inroads by expressing his understanding of Rwanda’s concerns – and its desire to be treated with respect. He should start with a gesture of goodwill by removing any known FDLR or RNC associates from the country.

War is unlikely and there is some hope – Kenyan president Uhuru Kenyatta has met with both leaders and may help to mediate between them. But if nothing is done to ease the current standoff, tensions will remain high, impacting not only regional relations but both countries’ development and integration, too.

We Asked Senegalese Migrants Why They Leave Home. Here’s What They Told Us